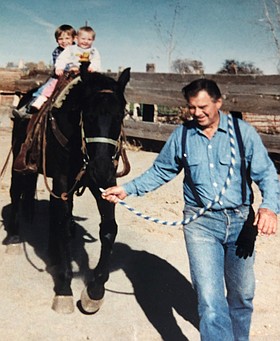 Ellis Lee Garner passed away unexpectedly on January 20, 2021. Lee was born November 8, 1927 in Weiser, Idaho. Known as Rocky by his family and friends in his younger days, he came from a meager existence. Lee loved history and once stated, “old lady Hatfield used to babysit us”. (Hatfield and McCoy’s). As a young boy he had the duty of running from the train station to the dam keeper, who was his grandfather, with the information of the amount of water to be released into the Snake River. A few years later he joined the US Army. Upon discharge he met his bride to be (Luella Seefried) one evening at a movie theater in Twin Falls, Idaho where she worked. Jobs were few so he headed to Southern California. Using his military benefits he took a night job baling hay while achieving his Pilot and Barber Licenses during the day. He went on to own two airplanes of his own. Lee’s wife to be took a two day train ride from Twin Falls, Idaho to Brawley, California in 1949 to join him and begin their life together. They married that evening in Yuma, Arizona. Lee reenlisted in the United States Air Force Reserves at 23 years old in Rio Linda, CA. He and his wife moved up through California, having two children along the way. They settled in Reno, Nevada where Lee’s entrepreneurial desires ignited. They opened Lee’s Barber Shop, the Beauty Dena and the Chocolate Pit. Lee and Luella began to long for a slower more country life, so they purchased The Spudnut in Fallon, Nevada. By Luella’s suggestion, they renamed it the Cock N’ Bull, stemming from all the stories and banter amongst the local farmers. The menu leaning towards beef and chicken, it was a perfect fit. Once settled in, Lee began breeding Thoroughbred and Quarter Horses to race. He was blessed to have a few winners over the years. Lee did all he could to enjoy his life. He was a Golden Gloves Boxer, winning twice while in the Army. He played softball, winning state championships with his teams. He enjoyed hunting with his many friends and Lee was a natural guitarist having been instructed by George Bruns for a time.

Lee and Luella were very kind to family, friends, patrons and strangers over the years, helping and giving what they could. Lee was a very humble man who lived a fulfilling life. Lee always said “If you don’t have dreams, then what do you have?” he will be greatly missed by all of those who had the pleasure of truly knowing him.

Lee Garner is survived by his wife Luella, son Michael, daughter Leslie, grandchildren Ellis and Lexie, all locally, and Brothers Ronnie and Sidney as well as his sister Beverly of Oregon.

A graveside service with military honors will be held Friday Jan 29, at 2:00PM at the Fallon cemetery. Arrangements by Smith Family Funeral Home, 423-2255.