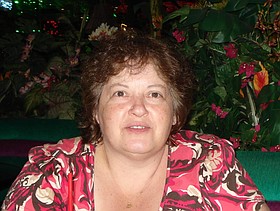 Sharon was born May 12, 1961 in Kansas City, Kansas to Vivian Sue Macon VanTrease and William Willard Verlan VanTrease. She moved with her family to Fernley, NV where she graduated from Fernley High School and attended the local community college.

Sharon loved collecting dolls, traveling with her husband and spending time with her grandchildren. She traveled frequently to destinations across the mainland US, Hawaii and further away to tropical locations in southern Mexico and the Caribbean. Sharon was known for her upbeat, happy personality and laughter as well as her generosity; a birthday, anniversary or holiday never went by that Sharon didn’t send cards, pictures _and token gifts to celebrate those she loved.

She met the love of her life, Alberto Garcia, and they were married on December 15, 1983. They made their home in Carson City, NV where they raised two daughters, Melissa Sue Garcia and Amanda Rose Garcia.

Sharon is preceded in death by her parents and brother Phillip Ray VanTrease.