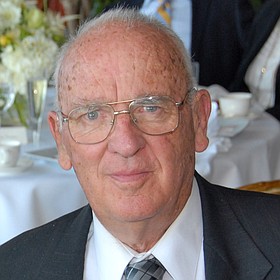 Born in January 1934 to Hans and Charlotte Jepsen, Bob was raised in Minden, NV and Lake Tahoe where he enjoyed fishing, outdoor activities and community life. He graduated from Carson Valley High School and attended the University of Nevada where he met his bride-to-be and wife of 65 years, Barbara. In June 1956 he graduated college, married Barbara, bought a car, and joined the Army where he was stationed in Alabama for two years. In 1958 they returned to Carson City to make it home, where Bob taught math and coached at Carson High School. He later got a master’s degree from the University of Nevada and was the principal of the Carson Junior High School for 25 years until 1989.

Active in civic life, he was a 50-year member of the Carson City Rotary, recipient of a Rotary Paul Harris Fellowship, and involved with Rotary International Youth Exchange. For many years he was Director of the Carson Ski Program, volunteered with Special Olympics, was appointed as a lay-member of the Tahoe Regional Planning Association, and was a member of the United Methodist Church. He was District Chairman of the Pinenut District, Nevada Area Council of the Boy Scouts of America and received the Silver Beaver Award for his service. In 1985 he was named “Carson City Man of the Years”.

On retirement Bob continued his civic activities; he and Barbara enjoyed travel and camping across the United States and numerous international adventures. His garden was bountiful and widely shared.

Even with his many school and volunteer duties, his priority was family, and he was a devoted husband and father. Family life was active with memories of times at Lake Tahoe, skiing, and camping on the Oregon Coast.

He is survived by his wife Barbara, a son Price (Dean), a son Tom (Cindy), his treasured grandson David, and his twin brother John (Sue). His parents, and a brother Ray predeceased him.

There will be a memorial service on Monday, July 26th at 2PM at the First United Methodist Church in Carson City with a reception following. There will be a private family interment in the Genoa Cemetery.

Those wishing to make memorial gifts are asked to consider the “Robert and Barbara Jepsen Scholarship” in care of the Carson Rotary Foundation PO Box 504 Carson City, NV 89702, or The Carson City First United Methodist Church.