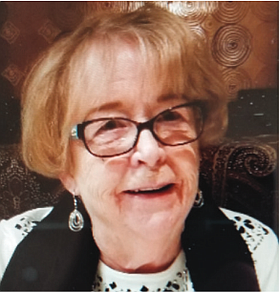 Marge, 89, of Minden, NV, peacefully passed away with her daughters by her side.

Born in Kansas, she was 1 of 5 children from parents Reginald and Myrtle. In 1909, Marge’s grandparents, father and 6 siblings emigrated from England.

Marge began her young career in Missouri as a buyer to an upscale department store prior to working in accounting at TWA and moving to Manhattan Beach, CA in 1958 in her VW convertible beetle. She married and raised 3 children before returning to a career in aerospace and accounting. In 1992, she moved to Minden and became a buyer/manager for Carson Valley Inn Gift Shop until retiring in 2000.

Marge’s greatest joys came from her 8 grandchildren, 3 great-grandchildren and the view of Job’s Peak. She attended countless lessons, sports, activities, and performances of her big family. Her pride in their achievements were forever spoken about.

She is survived by daughters, Diana and Mary (Bill); her sister, Mary (Rudy); 8 grandchildren: Jaclyn (Sal), Nicola, Alex, John, Sabrina, Steven, Sarah, Ashley and 3 great-grandchildren: Chloe, Ava, and Lincoln; numerous nieces, nephews and in-laws. She is preceded in death by her 3 brothers and son, David Lyons.

A Celebration of Life will be held on Friday, June 18 at 2:00 pm at Coventry Cross Episcopal Church, Minden, NV.