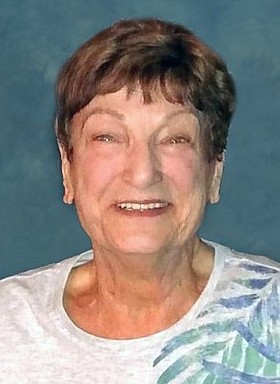 With profound sadness, Ruth Marie Olejnik passed away in Carson City on April 26th, with family by her side. She was born to James and Leola Hudlow in Gary, Indiana, on April 19th, 1938, and had two brothers, William Hudlow and Leroy Hudlow.

Ruth led a rich, full life, and is survived by three children, Andrew Cerda, Joseph Cerda (Sheila) and Daniel Cerda (Elaine). She is also survived by six stepchildren, Terese Myers (John), Patricia Mount, Barbara Corey (Tom), Mary Ellen Ehlman (Cort), Denise Villa (Tony), and Michelle Buechler (Dave). Ruth is survived by grandchildren Christopher Cerda (Amanda), Joseph Cerda (Shyla), Socorro Cerda, Aimee Cerda (Jared), Arik Cerda and Clarice Cerda. Clare lived close by and was always there for her “grams” whenever she needed a favor or help with anything at all. Ruth referred to Clare as her “little angel”. Also surviving are three great grand-children, Hailee, Aubrey and Lincoln. There are also many, many step- grandchildren and great-grandchildren.

Ruth was preceded in death by her parents, her brother Leroy and husband Michael John Olejnik.

Ruth moved from Indiana to Nevada in 1983 with husband Mike and son Danny. She loved going to casinos, taking driving vacations, having conversation with family, and dancing with Mike to country western music. She was a hard worker and didn’t know what the term “sick day” meant. Ruth’s career was in accounting and bookkeeping. Her ability to record, file, organize and store documents and personal paperwork was unmatched, and that skill carried over into her home life where she kept her home and possessions spick and span clean. It was hard to even find dust in her house. The job she most loved was when she worked in the cage at the Railroad Pass Casino in Henderson, NV. In the days leading up to her passing she even told her family of a dream she had where she hit 6 Royal Flushes at the Railroad Pass and that it was the best dream she had ever had.

Ruth was an amazing woman and will be dearly missed by family, friends and neighbors. Rest in peace mom, grandma, great grandma, we love you.