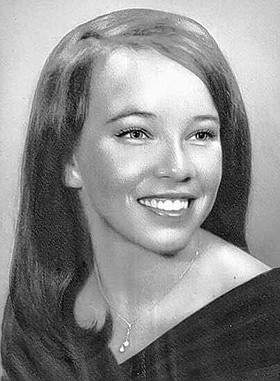 Alison Kies Wasielewski, age 69, beautiful and joyful resident of Maharishi International University in Fairfield, Iowa since the 1970’s, passed away peacefully at home on May 12, 2021. She was surrounded by her loving husband, Dan Wasielewski, family from Nevada, caring friends, and angels.

A musical, dancing, and theatrical shining star, Alison graduated from the University of Nevada, Reno, with a bachelor’s degree in music and was a Carson High School graduate Class of 1969.

Alison was a devoted teacher and practitioner of Transcendental Meditation for decades serving in numerous roles over the years in Fairfield and traveling internationally while working with Dan for the TM organization.

She was Dan’s “Warrior Princess”. She exuded happiness, humor, strength, intelligence, love, and support for all, and was greatly loved by her Nevada family, MIU community and beyond.

She courageously battled cancer, chemo, and radiation treatments throughout all of 2020 and this year, while also dealing with multiple sclerosis for many years.

Born in Austin, TX, on September 22, 1951, Alison is the daughter of the late Ralph and Gena McCall Kies, beloved teacher at Fritsch Elemetary. Her father was a noted musician and choir director in Texas. After her younger years, growing up in Texas, Alison moved with family to Las Vegas, and then to Carson City.

At Carson High, her talents blossomed. She excelled in scholastics and was a popular cheerleader, choir member, and played the lead role in the senior production of “Peter Pan.”

A mezzo soprano, Alison sang in the UNR opera program directed by Ted Puffer. She performed at the Pioneer Center for the Performing Arts, Trinity Episcopal Cathedral, and other venues, and was formerly employed in the UNR Music Department.

At MIU, her work ranged from writing and editing in Publications, to working with Dan in Chicago, managing the famed Blackstone Hotel, and later together directing the Maharishi Enlightenment Center in Antrim, NH. She created and sang with the One in Trio for many events.

Alison was preceded in death in 1980 by Miriam Gena, beloved baby daughter with Dan. Alison is survived by her husband of 43 years, Dan; her precious brother Sean Kies of Carson City and sister Stacy Kies Endres and husband Jim of Reno; and beloved cousins in Texas and North Carolina.

Her family extends gratitude to many caring friends at MIU and caregivers at Jefferson County Health Center, at University of Iowa Hospitals and Clinics, Iowa Home Care and Good Samaritan Hospice.

Per Alison’s request, her body has been cremated, arrangements by Behner Funeral Home, Fairfield. A Celebration of Life will be scheduled and announced in the coming weeks at MIU.