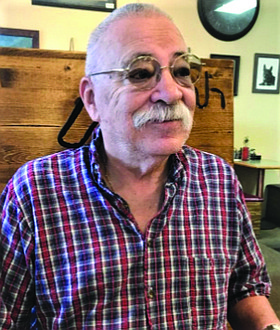 In 1990 Steve married Cynthia Peters in Virginia City, Nevada, and a few short months later had his daughter Edie. He enjoyed going to Reno Aces games, watching the San Francisco Giants and 49ers games at home, and he loved when Edie’s friends brought around their little kids.

Steve could be counted on to make anyone laugh and smile. He will be remembered by most because of the impact he left on their lives within the first meeting. He will be greatly missed by all, but in a better place no longer suffering.

He is survived by his wife Cynthia, brothers Brian Smith and Tim Culp, sister Sherri Webb, his Uncle Bob Taylor; his Sons Stephen (Tammy) and Michael (Erica) and daughter Edie, and his grandchildren Mackenzie, Austin, Savanna, Carson, and Allie. He also is survived by his nephew Robert Webb and nieces Melissa Herbert and Jessica Smith.

He was preceded in death by his parents LeRoy Smith and Versa Taylor-Culp, Uncle Edward Taylor, his brother-in-law Rob Webb, and his ex-wife Stephanie Phillips.

In lieu of sending something to the family memorials may be made to Alzheimer/Dementia Research: https://act.alz.org/site/