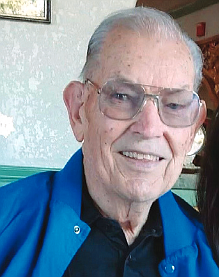 As I write this, his son Mark, we in the family affectionately called him the “Black Widow”, but he loved and cared for his wives so graciously and lovingly. God bless them all and may their souls Rest in Peace.

Rich joined the U.S. Army/Air Corps in 1942 and served as a B-26 gunner during World War II. He is the last of the “Greatest Generation” in our family. He retired as a Major in the U.S. Military Reserve in 1982. After the war, he moved his family to Berkeley, California, where he became a State Farm Insurance Agent, and in 1963, moved again to Carson City to raise his two sons, Robert and Mark. He joined the State of Nevada Economic Development Department as an Economic Analyst, retiring in the early 1980’s, and moved back
into the Insurance industry as an independent Agent until his retirement in 1989.

Our family is so proud, thankful, and lucky to share in his life.