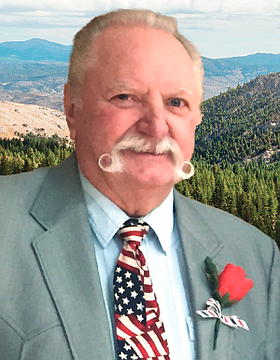 William [Bill] James Kausler passed away at his home peacefully with his wife and daughters nearby five days short of his 79th birthday. He had been suffering from Alzheimer’s
for several years.

Bill was born on October 1, 1942, to Robert and Mary Agnes Kausler in New Kensington, Pennsylvania. He went to Connelly Vocational School in Pittsburgh, PA.

He joined the Army in 1959, in the Missile Corp and spent time in Germany. He got an honorable discharge in 1962.

He met his wife Barbara [Barbie} on November 18, 1963, in Glendale, California and married her January 18, 1964, two months later in Van Nuys, California at the Assembly of God Church. They were just four months short of their 58th Anniversary at his passing.

Bill and his wife Barbie moved from Glendale, CA to Carson City in May 1972. They lived in the same house almost 50 years.

In 1973, Bill and Barbie joined the White Shrine of Jerusalem Sierra Sage Shrine #3 in Carson City.

In 1976, Bill and Barbie had their first child Erin. She lives with her husband Tim and three daughters. Audrey 26, Savannah almost 11 years old and Avery 9 years old.

In 1984 Bill joined the Kerak Shrine in Reno. And in 1985 he joined the clown unit and became Chief Clown in 1986. His clown’s name was “Sparky” being an electrician it seemed
appropriate. He and his “Hot Dog” dachshund Mitzi with buns on her sides” were in the Nevada Day parades, also in Fallon, Fernley, and Reno Rodeo parades.

In 1990 Bill was invited into the Royal Order of Jesters Reno Court #33.

In 1997 Bill retired from the State of Nevada Department of Prisons as an Electrician.

Bill was preceded in death by his parents and brother Robert Kausler in 2002 at age 62.

Bill’s sister Kathleen {Kathy} and her husband Jim and his brother Daniel and his wife Denise all live in Pittsburgh, Pennsylvania area. Bill has several nieces and nephews living in
Washington, Oregon, Idaho, California, and Pennsylvania.

In lieu of flowers, send donation to Shriners Hospital for Children in William’s name by calling (775) 856-3330.