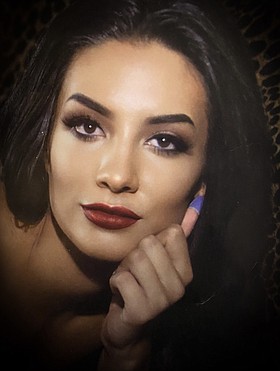 Samantha was born March 9, 1998 in Reno, NV and grew up in Fallon, NV. She graduated in 2016 from Churchill County High School where she was a member of the choir and cheerleading team. After graduation, Samantha moved to Los Angeles to pursue a career in modelling and found her passion in songwriting. She lived in LA for several years before returning home to Fallon to be with family while making plans to travel the country.

Samantha is survived by her parents, David and Caryn Nihoa; her sisters Sidney Ludwick and Tara Marin; her brothers Fred Woodall and Jordan Nihoa and wife Melyssa Nihoa; her grandparents Harold and Diana Ludwick; and numerous aunts, uncles, cousins, nieces, and nephews.

Samantha’s memorial service will be held on Friday, October 15th at 1pm at Smith Family Funeral Home at 505 Rio Vista Dr in Fallon, NV. A reception will be held afterward with a potluck dinner at the Fallon Paiute- Shoshone Tribal Gym at 8955 Mission Rd.