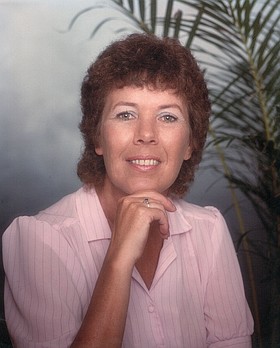 Beloved wife, mother, grandmother, and great- grandmother passed away peacefully in her Carson City home on September 29, 2021, at the age of 81.

Bette was born February 28, 1940, in Southgate, California, to Lyle Wardell Mumford Sr. and Edith Delna Munson. She was raised in Tacoma, Washington, and moved to Ely, Nevada during her high school years and graduated from White Pine High School. She moved to Reno after high school and married her first husband, Walter Charles Larsen Jr. (Pete). They had two children, Cheryl Ann Larsen, and Michael Walter Larsen.

After the passing of her first husband, Bette went into business for herself. Bette and her sister Kathy Allen opened The Blarney Sister, a tavern in Carson City in 1985. She later sold her business and bought The Timbers Saloon in 1991. She became very successful and well respected in the Carson City community. Easily making friends and making people feel comfortable was one of her best traits. She had a nickname for everyone and loved the practical joke. With her success at The Timbers, she would pay it forward with many philanthropic efforts such as the Chuck Benton Annual Golf Tournament, the Tom Brooks Memorial Fishing Tournaments and donating several scholarships to Carson High School graduates interested in attending a vocational school. Bette always wanted to be a Social Worker and said that helping her customers and her community was her way of being a “social worker” in her community. Every year, she and her life partner, Mike, would provide holiday meals to her customers who had no family to go to or who just wanted to come say “hi”.

After 38 years together, Bette married the love of her life Michael Henry VanOverbeke on April 17, 2021, in her back yard in the presence of her children.

Bette was preceded in death by her parents, her brother Lyle Wardell Mumford Jr., her sister Kathy Allen, and her first husband Pete.

A Celebration of Life will be held at The Plaza Hotel Event Center in Carson City, Nevada on November 6, 2021, at 2:00pm.