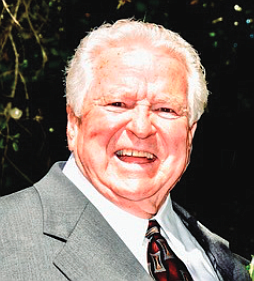 James Harold Miller passed away on October 4th surrounded by his loving family. Known by his close friends and family as “Jimmy”, he was born on October 11th, 1928 in Yerington, Nevada. Moving to Gardnerville as an infant, he was one of fine children (John, Joyce, Janet and Kim) to parents, August and Effie Miller. Growing up in Carson Valley, he was active in virtually all activities in and out of school. He played football, basketball and served as Student Body President, graduating from Douglas County High School in 1946. He went on to attend University of Nevada, Reno and National School of Meat Cutting in Toledo, Ohio. While at UNR, he was a member of the Alpha Tau Omega Fraternity.

During high school, college and throughout his life, Jimmy worked in the grocery and meat business, beginning in Gardnerville at his Great-Uncle Steve Imelli butcher shop, in Minden for Dangberg’s Meat Company and at Lake Tahoe for Young Brother’s grocery store. Jim established Miller’s Market in 1960, which was a landmark known by all in the community and Northern Nevada At Miller’s Market, you always knew he was there with his friendly, booming voice greeting everyone who entered. He was known best for his outstanding customer service and the highest quality dry aged beef. He established several signature items; his homemade German sausage that he made around the holidays and applewood smoked bacon and hams. He is most remembered by all the kids as he handed out hot dogs from the meat department.

In Carson Valley, Jim was extremely active in the community, serving as president and member of Minden Rotary and 20-30 clubs. Also serving on the Gardnerville Fire Department and later Douglas County Fire Department and in county government on the Planning Commission and Sewer District. Jim was a longstanding member of Trinity Lutheran Church in Gardnerville and St Luke’s Lutheran Church in Reno.

Jimmy loved people and his gregarious personality was larger than life. Jim was an avid SF Giants and 49ers fan and he enjoyed tailgating at UNR football games. Jim loved to cook (for 100 people more than 5!) and you could always plan on incredible food whenever he was involved. He developed his talent for cooking while serving in the Army during the Korean War which he served in from 1951-53. His wife, Nevalyn, preceded him in death in 1991. Upon Jim’s retirement, he lived in the Reno area and continued to make many friends while loving to play golf, cribbage, domino’s and attending every event in which his grand children were
involved. He was also preceded in death by his long-time companion of 25 years Esther Johnson in 2019.

Jimmy’s smile, fun personality and enduring love for his family will be deeply missed.

Memorial Service at Trinity Lutheran Church in Gardnerville, NV at 1PM on Saturday, October 16th. Celebration of Life reception to follow at the 570 Mottsville Lane, Gardnerville.

In lieu of flowers please make donations to the Carson Valley Historical Society at
1477 US Highway 395 N, Gardnerville, NV 89410
https://www.historicnv.org/donate/