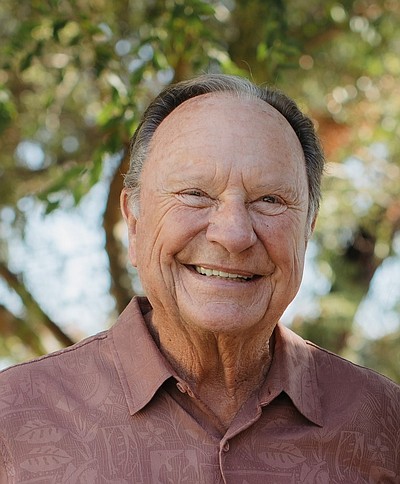 Gary’s story truly began when he met the love of his life, Claudia, at Ukiah High School where they graduated in 1961 and were married in 1962. After attending Golden Gate Business College in San Francisco, he worked as an appraiser for Peninsula Savings and Loan Association in San Mateo, CA. It was there that Gary learned to value single-family homes, small apartment buildings and pre- construction projects. In 1966 they moved to Incline Village, NV and started their first business, Casteel Corporation where they built mountain homes at a time when the year-round population was only around 300 people.

Gary and Claudia knew that four was better than two; son, Gary Jr., arrived in 1964 and daughter, Alayne Renee, in 1968. The family and business were growing and in 1974 the daring couple purchased the Lampson Plaza shopping center in South Lake Tahoe, CA, an iconic neighborhood shopping center located at the “Y”. Always the visionaries, they converted Lampson Plaza to one of the first factory outlets on the West Coast in 1988. Soon after in 1990, Gary developed a new corporation, Trans-Sierra Investments, Inc. (TSI), which secured the development rights to build the Grand Residence Club Hotel and commercial retail mixed-use redevelopment project, internationally known today as “Heavenly Village,” adjacent to Stateline, NV. TSI continues to own and operate The Shops at Heavenly Village.

Gary and Claudia raised and legally adopted their 2 1/2-year-old triplet grandchildren after daughter, Alayne, passed away in 2002. Gary always said, “We were blessed to have the privilege of raising them and it was a miracle to be parents of two families like we have.” Gary Jr. left his career to join the family business, allowing Gary Sr. to spend more time to raise their young family. He and Claudia spent quality time traveling, including a 3-month American history tour, consisting of 5 people and a dog in an RV traveling across the United States; Gary loved American history.

Gary’s life-long love of horses started when he was 6 years old with “Baldy”, a cow-pony from the home of Seabiscuit, Ridgewood Range in Willits, CA. This love developed into a family passion, with everybody (including Gary!) competing in rodeo, stock horse, and cutting horse events together. Gary always dreamed of owning his own ranch, which led to the purchase of Cutter Ridge Ranch where “everything” horse-related could be experienced. He loved ranch life - wide open spaces and gazing on God’s creation.

Gary also loved fast cars. Together, the Casteel family enjoyed hot rods and performance cars. This led to a deep friendship with Boyd Coddington and being showcased in the American Hot Rod television series. The family was featured in episodes over two seasons, ’36 Ford Build and ’59 Twin Turbo Corvette, where Gary raced against his son, Gary Jr., on the track in 2007. Gary took all his kids and participated in the famous Bob Bondurant racing school three-day course, where the whole family perfected their driving skills and racing abilities.

In the 1970’s, Gary became a certified pilot and later turned his love of flying into a successful aviation company. The business supplies air-transported organs and medical teams to health facilities across the United States.

The Casteel Family are long-time supporters of Sierra Lutheran High School (SLHS) and for two years, Gary was proud to serve as an assistant coach to Pastor Juls Clausen for the Girl’s Golf Team. Their team’s accomplishments were some of the many joys of his life. He and Pastor Clausen were so proud of their team’s hard work both athletically and scholastically as they went on to win the State Championship in the second year.

Gary and Claudia are strong supporters of Christian education for their children and the local community. They love watching the kids and SLHS students grow their future careers, develop a love of learning, and strengthen their Christian faith. They continue their support as the triplets attend college at Concordia University, Irvine, CA.

Gary’s life and business always focused on family. Of all his passions, being a husband, father, and grandfather, were his greatest achievements and provided the most joy. Gary’s enthusiasm was contagious. He truly enjoyed talking to others and built relationships wherever he went. He inspired everyone to live bigger, showing kindness and love to others the way he did. Gary’s creativity, ingenuity, and love of life were limitless and he showed us what was possible. He always said, “Don’t limit yourself, you can achieve anything or do anything you want in life.”

Gary is survived by his wife Claudia, of over 59 years, his son Gary Jr. (wife Marci), his triplet children Avery, Cash, and Adyson, his grandson Crue, and his sister Shannon Casteel.

The Celebration of Life will be held at Sierra Lutheran High School, 3601 Romans Road, Carson City, NV, at 1 p.m. on Sunday, November 7th.