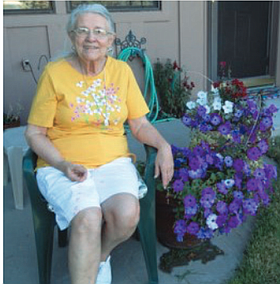 Virginia Anne (White) Nuzum, 89, died Friday, August 27, 2021, in Carson City, Nevada. Born to Virginia and James B. White on July 20, 1933 in Reno, Nevada, Virginia lived most of her life in the state she was born in and loved. Very bright, she graduated from high school two years early and later attended the University of Nevada.

Her math skills were often put to work in various jobs. During the 1950-60s in California, she worked for Nutrilite supplement company and for the Fender Musical Instrument Company. One day the legendary electric guitarist Dick Dale was in her office and she had him call
her daughter who was home sick, a thrilling moment for a 13 year old.

In the late 1960s, she returned to Nevada to reside in Carson City where she worked for the Nevada Dept of Motor Vehicles and later as a travel agent. With a brief exception when she lived in Southwestern Oregon for a couple of years before returning to Nevada in 2015, she spent the rest of her life in Nevada.

Virginia was drawn to be a travel agent due to her love of travel and photography. Among other places, she traveled to China, Japan, Thailand and also to Mexico and Costa Rica. Her home contained a fine collection of the many items she collected in her travels as well as some lovely pieces of her photography.

Service was very important to Virginia and she served on a committee to promote Nevada Day for a number of years and she also served with the Kiwanis. In 2003, she was awarded the Excellence in Grants Award by then Lt. Governor Lorraine Hunt for her “perseverance in the promotion of tourism for rural Nevada.” The same year she also received Senatorial Recognition from Senator
John Ensign for her “selfless dedication and exceptional
service to strengthen tourism in Nevada.” In 2006, she was granted the status of District Life Member by the California Nevada Hawaii District of Kiwanis International in recognition of her “outstanding individual contributions to Kiwanis and community.

”Virginia will be remembered for her quick wit, sense of humor, and intelligence. She is survived by four daughters: Ginger Storey-Welch (Doug Welch) of Colton, NY; Michelle Enright of Poway, CA; Judy Givens of Fullerton, CA; and Trudy Nuzum of Irvine, CA. She is also survived by seven grandchildren: Heather Laeger of Gold Hill, Oregon; Melissa Rosett of Long Beach, CA; Michael Albee Martinez (Fred Martinez) of Dallas, TX; Tabetha Marsh (David Marsh) of Palmer, Alaska; Stephen Welch of Moira, NY; Kimberly Welch of Las Vegas, NV; and Brian Welch of Rock Hill, SC. In addition, she is survived by thirteen great-grandchildren and a niece, Doris Lyon, in Mt. Vernon, WA. She is pre-deceased by her parents, her husband John J. Nuzum, and her son James R. Albee.