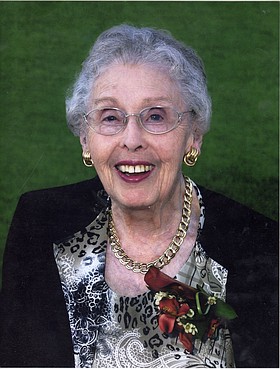 Our mother, Elaine Adams Harris, a resident of Carson City for 67 years, returned to her heavenly home on August 30, 2021. She was 100 years old when she died peacefully in her sleep at her daughter’s home in Carson City.

Born in Layton, UT, on April 18, 1921, she was the first of four children born to Golden Marion Adams and LaVerde Evans Adams. Her courageous 100 years spanned the time of the Great Depression through the time of COVID quarantine and everything in between. Mom grew up in a loving family including grandparents, aunts and uncles, and lots of cousins. She graduated from Davis High School in Layton, UT, in 1939 and from Utah State University in 1943.

Mom fell in love with Bryan Harris after he had returned from serving in the Pacific theatre of WWII. They married for time and eternity in the Salt Lake City Temple of the Church of Jesus Christ of Latter-day Saints on February 19, 1949. They built their own home in Layton and welcomed their first child in 1950. In 1951, Dad was transferred to Nevada with the Bureau of Reclamation. Mom always said she understood the assignment was to be only for 18 months or she wouldn’t have come. However, they fell in love with Nevada and made Carson City their permanent home.

Mom worked for the Carson City School District for 25 years as a substitute teacher and earned the nickname “Eagle-eye Elaine” because students got away with nothing when she was in their class. She threw fear into several generations of Carson City students, but the school administration loved her.

An active member of the Church of Jesus Christ of Latter-day Saints, Mom served in many callings, some of which included working with young women, serving as stake Relief Society president, teaching Sunday School, and serving with our dad on a full-time mission in the New York City Mission. Her faith in Jesus Christ was the guiding light in her life.

An accomplished seamstress, crocheter, and quilter, she constructed countless costumes for plays and sewed all of her daughters’ clothes. Her mantra was, “Anything worth doing is worth doing well.” Mother was a refined lady and a gracious hostess. However, her greatest pleasures came from her grandchildren and great grandchildren.

Mom was predeceased by her husband, Bryan, her son-in-law, Dan, her parents and her sister, Lois.

She is survived by her daughters Pam (Lamar) Gilbert of Othello, WA, Margo Leatham of Carson City, NV, and Laurie (Larry) Ball of Chandler, AZ, her brother, Clark G. Adams (BJ) of Washington, DC, and her sister, Marion of Rancho Santa Margarita, CA. She is also survived by 16 grandchildren and 56 great grandchildren.

A special thank you to Eden Hospice, who lovingly cared for our mom these past three years.