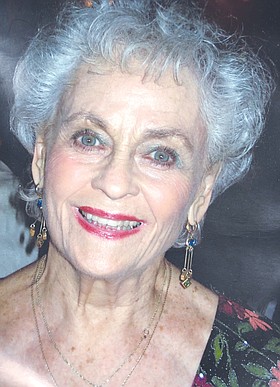 A beautiful, beloved mother, grandmother and aunt, Alice Charpilloz has passed away peacefully at the age of 96.

Although born in Los Angeles, at two years of age, her mother Helen, father Harry and brother Sam relocated to Needles, CA. Her father worked on the Santa Fe railroad for a time before becoming a policeman. Alice was ten when Harry heroically stopped a robber in a deadly confrontation that ended fatally for both men. Alice and her family remained in Needles after Harry’s death.

Alice spent the rest of her young life in Needles. She met and fell in love with her future husband, Kenneth Charpilloz, while she was still in high school. She and Ken married in 1944. A loving and romantic marriage lasting over sixty years. Ken was a pilot in the Army Air Corps during WWII and successful later in the Air Force. The Charpilloz family moved often enjoying homes in many states and several countries.

Alice and Ken were parents of four, Kathryn, Mary (deceased), Susan and Kenneth Jr. As a busy mother, who often raised her children alone while Ken traveled, Alice became a wonderful cook, energetic volunteer, and graceful hostess. Through the years Alice, an excellent bridge player, also excelled in entertaining friends, Air Force associates and dignitaries. She was a beautiful, accomplished woman and gracious true “lady”.

Ken retired in 1976 after an exciting and talented career of over thirty years, as a Colonel. Soon the empty nester Charpilloz duo settled in Carson City, NV. Ken played golf and Alice played bridge. For many years they happily camped all over the west with friends and family.

After Ken’s passing in 2009, Alice moved into Sierra Place Senior Living. She enjoyed many years there, under the kind and thoughtful care of their superlative staff.

Through her life Alice remained a devout Catholic who truly believed she and Ken would be reunited in heaven. She lived a full, vibrant existence and truly believed in loving family unity. Her legacy of love and her memory will endure forever.

Service to be announced at a later date.