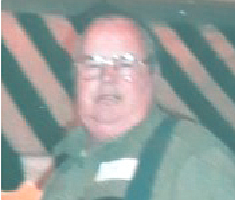 He was born to Arthur Howard Horsell Sr. and Mary Katherine Smith.

Arthur, moved to Carson City Nevada with his family in 1966 where he began working for the Nevada Appeal as a printer. He then began working for the state of Nevada, for the Department of Administration Printing and Micrographics Division until he retired in 1995.
Arthur began his volunteer service on December 14, 1967 as member #199 for Warren Engine Company No. 1. He concluded his service as an Exempt lieutenant. He earned various rewards for his 20 years of service with Warren Engine Company No. 1. Arthur was a proud member of St. Teresa of Avila Church where he was a member of the Knights of Columbus, served on the
parish council, and served as an usher (Red Coats) from 1967 until 1999. Arthur was a very strong, faithful, and helpful person throughout his life.

He is predeceased by his Parents, his younger sister Barbara Koon, and his wife Kathleen (Kay) Horsell.

A grave side service will be held on April 15, 2022, at 11:00 AM at Lone Mountain Cemetery, with a celebration of life to follow at Glen Eagles restaurant in Carson City Nevada.