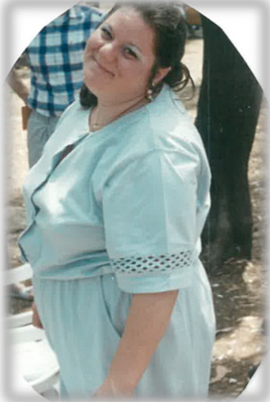 With heavy hearts the family of Ronda Lee Wilson Brown announce that Ronda was called to her heavenly home on March 13, 2022. She was effortlessly humorous and held a heart of gold for all she encountered. Ronda truly knew no strangers and welcomed all walks of life with grace and love.

Born and raised in Santa Rosa, California to Charles Wayne Wilson Sr. & Linda Lee Wilson (Brinkley), Ronda lived out her early years until she came to reside in Fallon, having such a generous family tie to the area. Ronda held pride in her everlasting dedication, not only to
her family but the community as well. She gave her efforts to the LAVVFW volunteering her time to the youth and veterans of the area. Ronda enjoyed brightening people’s day through smiles and conversation, passing time catching sunshine in the Nevada heat, and developed a
passion for writing poetry. She had her poem “Good old Ted” published in the (88-89).

Ronda is survived by her fiancé Kirk P Keddington, two sons Jonathon and Christopher Brown, grandchildren Zariah and William Brown, Isaiah Wick, and Linda Brown. She also leaves behind her twin sister Wanda S Wilson, two brothers Charles Wayne Wilson Jr and Donald Alan Wilson, nieces Dakota Smith (Wilson), Reyannah and Yvonna Wilson, nephew Charles Wayne Wilson lll, and great nephews Liam Wilson and Owen Smith. Ronda was above all else loved wholeheartedly and unconditionally by those she surrounded herself with. The weight of her loss will be carried for years to come by all that knew and loved her.

Her family will lay her to rest later this spring and will announce it in the newspaper and on Facebook with Pink and Red Roses; she also loved pink carnations so deeply.