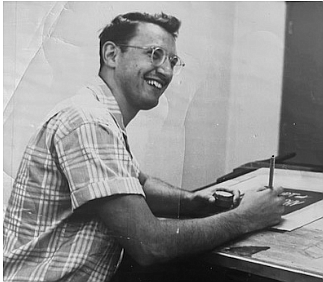 On the evening of April 3, 2022, Edward Sindlinger died at the age of 90 years old. Ed was born September 1, 1931, in Philadelphia, PA, to Albert Sindlinger and Thelma Jolliff. He had two older siblings: Jackie and Norman Sindlinger, niece Debbie Anne Nolan, and stepmother Nellie Sindlinger.

Ed lived his early life in New York City. During WW ll, his family moved to a farm in Wertsville, New Jersey. One year after the war ended, in the summer of 1946, Ed’s family traveled by car in an Oldsmobile cruiser-sedan headed east through the Carson Valley on their way back home to rural New Jersey from Los Angeles, CA.

It was then that Ed first fell in love with the Carson Valley. He often told his sons and daughters that he vowed one day to live there. Over 40 years later, he retired in 1986 from teaching art in Fresno, CA, and spent the rest of his life here in Nevada. Ed lived in Dayton, NV, for 36 years. He spent the last two years of life in assisted living at Skyline Estates in Carson City.

Ed had a wide range of artistic talents. He loved to explore and hike. His passions were aspen trees, beautiful landscapes, and unique rock formations. He especially loved reading the history of the first Nevada pioneer trailblazers which he researched using the Carson Library. After the research, he planned many hiking adventures which sought out those original old
trails. He photographed them and incorporated many of those photographs into his paintings and sculptures.

Ed was a happy man. He was happiest exploring many back roads of Texas, New Mexico, Colorado, Utah, Arizona, Oregon and Nevada. He lived in the moment and looked at the brighter side of life. He was polite and grateful for things big or small. He lived happily in
solitude with his art or among family and friends who knew his smile well.

Ed’s family is grateful to all who helped him. They would like to extend their gratitude and thanks to all the good care and kindness provided to him by the staff at Skyline Estates and A Plus Hospice Care.

Ed will be laid to rest in the Genoa Cemetery.