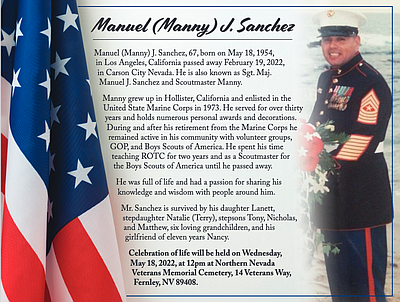 Manny grew up in Hollister, California and enlisted in the United State Marine Corps in 1973. He served for over thirty years and holds numerous personal awards and decorations. During and after his retirement from the Marine Corps he remained active in his community with volunteer groups, GOP, and Boys Scouts of America. He spent his time teaching ROTC for two years and as a Scoutmaster for the Boys Scouts of America until he passed away.

He was full of life and had a passion for sharing his knowledge and wisdom with people around him.

Celebration of life will be held on Wednesday, May 18, 2022, at 12pm at Northern Nevada
Veterans Memorial Cemetery, 14 Veterans Way, Fernley, NV 89408