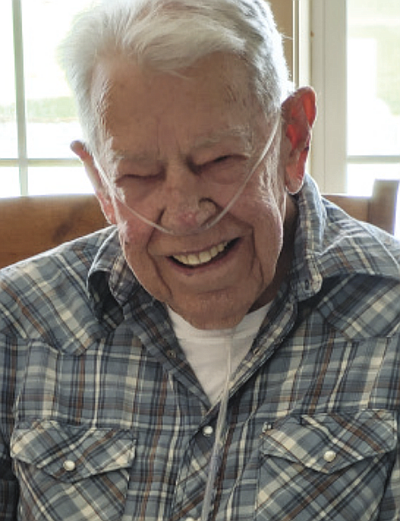 Elmer Daniel Hellwinkel passed away peacefully among family on July 29, 2022 in Fallon, Nevada at the age of 92.

Elmer was born May 17, 1930 to John and Augusta (Dieckhoff) Hellwinkel in Gardnerville Nevada, the youngest of nine children. Elmer married his sweetheart Betty (Williams) Hellwinkel and the couple had four children.

Elmer was preceded in death by his wife Betty in 1993, and his eldest son Michael in 2013.
Surviving are Elmer’s son Chris (Valree) Hellwinkel of Elko, NV; daughter Patti (Neil) Scott of Nampa, ID; and daughter Gail (Dale) White of Fallon NV. Elmer had nine grandchildren and numerous great grandchildren.

Between Elmer and his eight siblings they had over 50 children so Elmer has many living nieces and nephews located in Northern Nevada and Southern Idaho.

Elmer was an army veteran serving to guard the Panama Canal during the mid 1950’s Cold War era.

Family has planned a celebration of Elmer’s life at 10:00 am on Wednesday August 10th, 2022 at Parkside Bible Fellowship, 485 Tedford Lane, Fallon NV followed by a graveside service at The Garden Cemetary in Gardnerville NV at 2:30pm