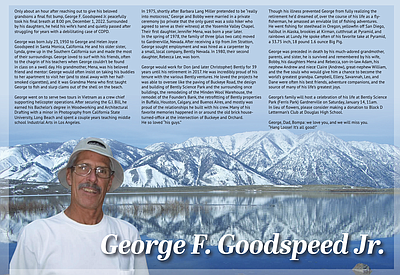 Only about an hour after reaching out to give his beloved grandsons a final fist bump, George F. Goodspeed Jr. peacefully took his final breath at 8:00 pm, December 1, 2022. Surrounded by his daughters, he held his wife’s hand and quietly passed after struggling for years with a debilitating case of COPD.

George was born July 23, 1950 to George and Helen Joyce Goodspeed in Santa Monica, California. He and his older sister, Lynda, grew up in the Southern California sun and made the most of their surroundings. George loved to surf with his friends, often to the chagrin of his teachers when George couldn’t be found in class on a swell day. His grandmother, Mena, was his beloved friend and mentor: George would often insist on taking his buddies to her apartment to visit her (and to steal away with her half-smoked cigarettes), and it was Grandma Mena who first taught George to fish and slurp clams out of the shell on the beach.

George went on to serve two tours in Vietnam as a crew chief supporting helicopter operations. After securing the G.I. Bill, he earned his Bachelor’s degree in Woodworking and Architectural Drafting with a minor in Photography from California State University, Long Beach and spent a couple years teaching middle school Industrial Arts in Los Angeles.

In 1975, shortly after Barbara Lang Miller pretended to be “really into motocross,” George and Bobby were married in a private ceremony (so private that the only guest was a solo hiker who agreed to serve as their witness) at the Yosemite Valley Chapel. Their first daughter, Jennifer Mena, was born a year later. In the spring of 1978, the family of three (plus two cats) moved to Gardnerville, Nevada. After receiving a tip from Jim Stratton, George sought employment and was hired as a carpenter by a small, local company, Bently Nevada. In 1980, their second daughter, Rebecca Lee, was born.

George would work for Don (and later Christopher) Bently for 39 years until his retirement in 2017. He was incredibly proud of his tenure with the various Bently ventures. He loved the projects he was able to oversee like the paving of Buckeye Road, the design and building of Bently Science Park and the surrounding once buildings, the remodeling of the Minden Wool Warehouse, the remodel of the Founder’s Bank, the retrofitting of Bently properties in Buffalo, Houston, Calgary, and Buenos Aires, and mostly was proud of the relationships he built with his crew. Many of his favorite memories happened in or around the old brick house-turned-office at the intersection of Buckeye and Orchard. He so loved “his guys.”

Though his illness prevented George from fully realizing the retirement he’d dreamed of, over the course of his life as a fly-fisherman, he amassed an enviable list of fishing adventures. He went fishing for steelhead in Oregon, yellowfin off San Diego, halibut in Alaska, brookies at Kirman, cutthroat at Pyramid, and rainbows at Lundy. He spoke often of his favorite take at Pyramid, a 33.75 inch, 18 pound 1.6 ounce Big Pig.

George was preceded in death by his much-adored grandmother, parents, and sister, he is survived and remembered by his wife, Bobby, his daughters Mena and Rebecca, son-in-law Adam, his nephew Andrew and niece Claire (Andrew), great-nephew William, and the five souls who would give him a chance to become the world’s greatest grandpa. Campbell, Ellery, Savannah, Leo, and Dane were often his best friends, adventure companions, and the source of many of his life’s greatest joys.

George’s family will host a celebration of his life at Bently Science Park (Ferris Park) Gardnerville on Saturday, January 14, 11am. In lieu of flowers, please consider making a donation to Block D Letterman’s Club at Douglas High School.