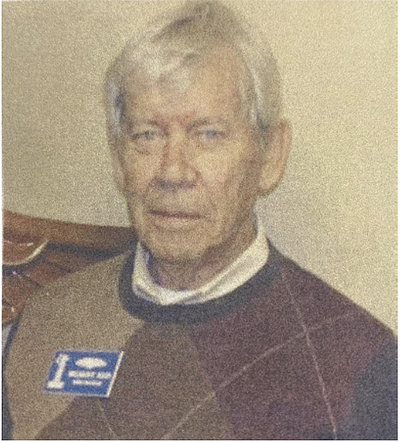 Belmont was born in San Jose, CA, to Charles Belmont and Mary Irene (Kilfoyl) Reid. He grew up in the Willow Glen area, graduated from Abraham Lincoln High School in 1945 and immediately enlisted in the Navy, serving a year before being honorably discharged as Seaman 1st Class. He liked to say that “once the Japanese FINALLY heard he had enlisted, they surrendered.” He enrolled at San Jose State College and graduated in 1950 with a BA in Engineering. While at SJSC he served on the Student Council, was a class president and a member of Alpha Phi Omega fraternity.

In 1948 he met his true love, Joan Evaneline Rogers. Within two months she was weaing his fraternity pin and they became formally engaged in 1950. However, the Korean War put a pause on their wedding plans when he was recalled by the Navy to active duty, which turned out to be a typical military SNAFU – His enlistment had expired before the recall orders were issued! But Belmont wanted to serve his country so again enlisted, only this time in the Naval Flight Training Program.

Belmont loved to fly. He had earned his Private Pilot’s License in 1950 and entered Naval Flight training in 1951. He held Commercial, Single-engine and Multi- engine Land, and Instrument ratings, logged over 2,500 hours private flight time and was presented with the Wright Brothers Master Pilot Award by the Quiet Birdmen organization. During the Korean War, he flew 85 missions in F9F Panther and F9F-6 Cougar fighter jets off the carriers USS Princeton and USS Yorktown in the Formosa Straights. His call sign was Joker 4. He was honorably discharged as a decorated Lieutenant in 1954 and retired by the Navy in 1984.

He married Joan on June 1, 1952, and in 1960 they formed Belmont Reid & Co., Inc., a full-service securities investment firm and a forerunner of today’s financial planning companies. Prior to selling the company in 1977, he was CEO of five subsidiary firms and had offices in Alaska, Hawaii, Washington and Nevada in addition to branch offices in California. After selling the company, he and Joan sold their home in Saratoga, CA and moved to Carson City, NV. Belmont wasn’t cut out for retirement, so in 1980 they formed JOBEL Financial, Inc., which they sold in 2012, and Belmont became “unemployed.”

When not traveling in their trailer or their own plane, or having to “go commercial” to places too far for their plane’s gas tanks, Belmont was active in the community. He was a past-president of the Carson City Chamber of Commerce and the Carson City Rotary Club; past- chairman of the Carson City Republican Central Committee and of the Nevada Republican Rural Counties. He was an active member of the Navy League, American Legion, Quiet Birdmen, Military Officers of America, Carson City Men’s Club, The Leisure Hour Club, and the Rotary Club of Carson City.

Belmont was a good man, honest and fair, a gentle man and a gentleman to the end. He is survived by Joan, his wife of 70 years, his nice Karen Crane, nephews Douglas and Bruce Reid, grand and great-grand nieces and nephews, and many friends whom he loved, felt were “family,” and whose friendship he truly valued. He will be greatly missed.