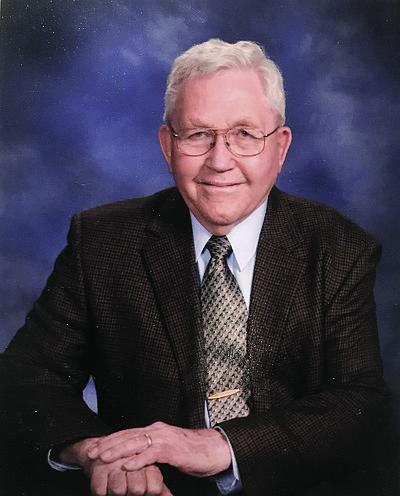 John Carsten Henningsen was taken to be with our Lord on January 8th, 2022. He was 96 years of age at his passing, but his family will tell you that he died of a broken heart as he dearly missed Virginia, the love of his life, and partner for 71 years.

John was born on April 10th, 1925 to Clarence W. and Mary R. Henningsen. He was born on the Carson Valley dairy ranch that became his home, his life, and where he enjoyed his final days with his children and so many special friends.

John was a third generation Carson Valley native. His grandfather, Carsten Martin Henningsen and three brothers immigrated to Carson Valley from Denmark in the 1870’s. Carsten Martin, purchased land and became instrumental along with other early settlers in developing Carson Valley into a dairy wonderland. John was raised on his grandfather’s and father’s dairy along with his sister Katharine. He learned early about hard work. As a small boy his first job was keeping the wood box full for heat. As he grew, he acquired the dairy chores and he learned how to harness the horses for mowing hay and directing the horse teams to pull wagons and operate the hay derrick. In his free time, he would invite neighbors to swim in the irrigation ditches. In the winter they would ice skate on ponds near Centerville.

John attended 1st thru 8th grade at Consolidated A Grade School which became the current Gardnerville Elementary School. He attended high school at what is now the Douglas County Historical Museum. He played 4 years of football and wore hand me down leather helmets from UNR. Upon graduation from Douglas High School, World War 2 was in full swing and John wanted to enlist in the army but was granted a deferment because of the dairy. Soon, however, he was happily drafted and joined several valley boys and headed to Camp Roberts for boot camp training.

John was an active soldier in the 25th infantry division at Luzon in the Philippines. Later he was assigned to Nagoya, and Osoca Japan in an occupation force.

Following his service in World War 2, John received the GI bill and enrolled at UNR where he majored in Agriculture. He pledged the ATO fraternity and soon needed a date for his pledge dance. He asked Virginia Shaw whom he shared a speech 101 class with. It was a match made in heaven and 2 years later they married and upon Graduation they moved onto the JOVI (John Virginia) Holstein Dairy and began their ranch life together. A new Grade A dairy barn was constructed, the ranch house was renovated and over the next 40 years 5 children came to realize what a blessing they were given to have experienced the joy of a 240-acre dairy ranch and two wonderful parents.

John, in addition to running the dairy, volunteered as a little league coach, 4-H leader, 20-30 service club member, and Rotary Club member. John was a lifelong member of Trinity Lutheran Church and served on multiple church boards. He was a noted bass singer in Trinity’s choir. John was also active in the Northern Nevada Dairyman Association, Alpine Land and Reservoir Company, Farm Bureau and other farming related organizations. John was known particularly for his character and kindness.

John was preceded in death by his parents Clarence and Mary Henningsen, his sister Katharine Wolf and his loving wife of 71 years, Virginia.