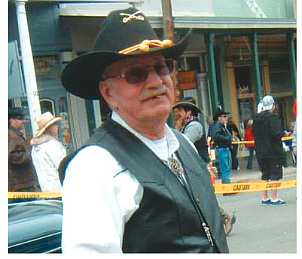 Ronald Greenslade passed away peacefully at John Muir Hospital in Walnut Creek, CA after a valiant fight of five months from burns he received from putting out a fire outside his home, only to succumb to infections due to the wounds he received.

Ron was born in Whitehorse, Yukon Territory in Canada but joined the U.S. Army 19th Artillery 1st Calvary Division. He later became a Color Guard with the VFW.

Ron loved his family, smoking his pipes, sipping his wine, cake decorating and cooking. He enjoyed Country music, sunrises / sunsets and spending time with horses, be it the ones on the ranch or the wild herds that came to visit him at his home in Nevada.

Ron is preceded in death by his parents, Doris and Ronald Lawton Greenslade, brother, Jerry, sister Joanne, his first wife, Carolyn and his second wife and soul mate, Kathy.

He leaves behind two sisters, Doreen and Jacqueline of Canada, two brothers, Calvin and Terry of Canada, his daughter Wendy Nove of Arizona, son, Ronald Leslie of California, two granddaughters, Elisabeth and Rebekah Greenslade of Colorado, a grandson, Shawn, a great
grandson, Aaron Thompson, two stepsons, Ron and Danny Day, and two step grandchildren, Heather and Jimmie Bouscal. He will be greatly missed by all that knew him.

May he Rest in peace.