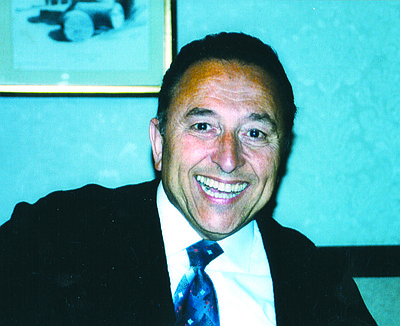 Mario Rosario Giallongo passed away on December 6, 2021, surrounded by his wife and daughters. Mario was born on July 15, 1940, in Treviso, Italy. He immigrated to the United States at the age of 9, and shared stories of his excitement at seeing the Statue of Liberty as a small child. Mario’s family lovingly remembers him as an aficionado of western movies, the biggest fan/critic of the San Francisco 49ers, and the person who most appreciated his own humor.

After graduating high school, Mario joined the Air Force, and went on to serve for four years, including a deployment in Okinawa, Japan. He married his wife, Judy, in May 1965, in Oakland, CA, and considered it one of the best decisions of his life. Their 56-year marriage was always an example of love and solidarity for their family.

Mario fought almost all of his life as an advocate for disability rights. He began his career at the U.S. Postal Service on December 11, 1971. Despite years of devotion to the job and several awards and recognitions, on June 29, 1980, Mario was fired as a result of his medical condition, Friedreich’s ataxia. The community and even the nation rallied around him and supported Mario in his ability to still perform his duties at the Post Office. Multiple news outlets featured photos of picketing advocates in their “We Support Mario” shirts. Letters of support for Mario’s cause poured in, among them recognition from the California Governor’s Committee for Employment of the handicapped, multiple Senators and members of Congress, and even a papal blessing from Pope John Paul II. Thanks to Mario’s fight, he was given his job back on January 11, 1981 and went on to work 25 years at the U.S. Postal Service.

His outstanding work even led to the opportunity for Mario, along with his friend and Honorable Postmaster Manuel Aguiar, to carry the Olympic Torch on its run to the 1991 U.S. Olympic Festival.

Those who knew Mario knew also of his faithful sidekicks from Canine Companions for Independence (CCI). Mario first got involved with CCI in 1998, when he was matched with Service Dog Salinas (Sali), a beautiful black lab. The two were inseparable, and Salinas truly became a member of the family because of all the love and help she provided to Mario. After Salinas’ passing in 2012, Mario went back to the CCI campus in Santa Rosa, CA and was matched with another black lab, DeAngelo. Having DeAngelo’s support allowed Mario to continue with all the activities he enjoyed, and DeAngelo provided him with endless love, comfort, and laughs. Mario attended events like the CCI Dogfest Walk and Roll and was so grateful for the incredible friendships he made within the CCI community.

Mario never let a medical condition define what was possible for his life. He well-surpassed the milestones and experiences that those who didn’t know him did not expect him to. He was a 4th Degree Knight of Columbus, traveled internationally, and enjoyed taking cruises. Mario was well- known in the local community and could often be found out on a walk with his service dog, or beating everyone in cards at the Senior Center (or so he claimed). His family never tired of hearing people say “Oh, I know Mario!” or of seeing the way he was lovingly embraced by so many.

Mario is preceded in passing by his father, Rosario Giallongo; stepfather, Salvatore Sunseri; mother, Elvira (Pisano) Sunseri, and his first CCI Service Dog, Salinas. He is celebrated in life by his wife, Judy; brothers, Giovanni (and Maria), and Joseph (and Patricia); daughters Theresa (and Hans) and JoAnn (and Sean); five grandchildren, Aleesah (and Patrick), April, Serena, Joshua, and Justin; and his loyal CCI Service Dog, DeAngelo. All are grateful to still hear his laugh when they look at photos of him smiling.

Mario’s family offers their sincerest thanks to his caregivers over the years: Michelle, Vickie, Brandy, Sarah, Gloria, Veronica, Nicole, and Aubrey. Thank you so much for your dedication and compassion.

Mario’s family invites all who loved him to celebrate his life on Saturday, February 26, at 11:00 AM, at St. Gall Catholic Church in Gardnerville, NV. Lunch reception to follow.