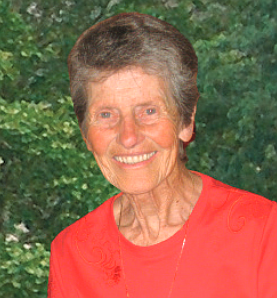 Mary Abbott died peacefully at her home in Gardnerville on January 16, 2022 at the age of 92. She was born Marie Grace Micheo on May 29, 1929 in Reno to Basque immigrants Joe and Jeanne Micheo.

The family moved to Gardnerville in 1937 to manage the French Hotel. They later owned and operated the Pyrenees Hotel and Bar where they lived and welcomed Basque travelers from the old country and all others.

Mary graduated from Douglas County High School in 1947 and UNR in 1951, where she was a member of Kappa Alpha Theta. Upon graduation, she moved to Washington, D.C. and served under Senator Pat McCarran on the Senate Judiciary Committee. It was there she met a Nebraskan named George Abbott. They were married at St. Gall Catholic Church on October 1, 1955 and lived an exciting and glamorous life in D.C. before returning to the Carson Valley in 1961 to raise a family. She worked for George as a legal secretary for many years. She was active in the St. Gall Altar Society, Minden Fortnightly Club, Mendiko Euskaldun Cluba, Douglas County Historical Society, Blue Star Moms, her bridge club, the Douglas County Ski Club and anywhere else she could volunteer.

The couple was blessed with three children: Jeanne, George and Chris. Mary was never far from the activities of her children and extended family and in later years, their children. She managed Boy Scout troops & softball teams, helped with 4-H and FFA projects, and hosted pool parties for hundreds of birthdays, family gatherings, team barbeques and more, including five wedding receptions.

Every winter Sunday for almost 30 years she skied with the Ski Club. It was the joy of her life to be with friends and family, and she opened her home to everyone. There were no strangers in Mary’s life, only friends she hadn’t met yet.

Mary was a loving, selfless, gentle soul who had compassion for every living thing. She was adventurous, never declining a chance to backpack, take a road trip or meet new people. She loved to cheer on the Tigers and attend Wolf Pack tailgate parties. She was proud of her Basque heritage and enjoyed a good picon with friends. Though her mind declined in later years due to Alzheimer’s, she was never, ever without a smile on her face. She was loved by everyone who was blessed to know her.

Please join us on Tuesday, Feb. 8 at St. Gall Catholic Church for a reception (12 noon) and mass (1 pm). Masks are required at St. Gall. Online condolences can be left at waltonsfuneralhomes.com.

In lieu of flowers, please make a donation to the Douglas County Historical Society or the Mendiko Euskaldun Cluba Dance Group in Mary’s name.