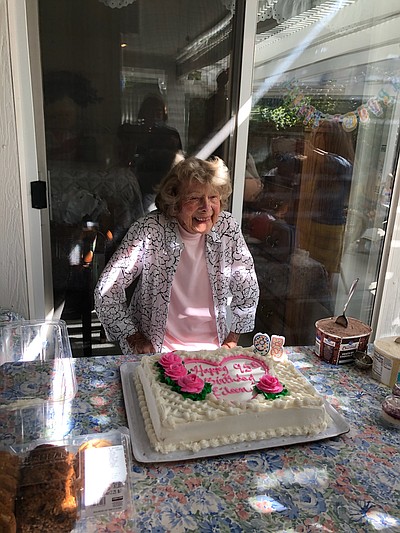 Eileen Paloolian was born September 27, 1925 in
Winona. Minnesota to Russell and Anna Smith.
Eileen grew up in Alma, Wisconsin and was the first
daughter of seven children. Eileen moved with her family
to San Diego, CA in 1942. That is where she met her
"sailor," Paul Paloolian. They married while Paul was in
the Navy, January 31, 1944, and settled in Los Angeles,
CA. Eileen was a homemaker and they raised their three
children in Reseda, CA. By 1962, Paul and Eileen moved
to Reno, NV and Paul started a woodworking business.
Later on, they settled in Carson City and she eventually
worked for DOT while Paul continued his woodworking
business. They were in their Carson City home for 48
years. Paul Passed away in 2016 and Eileen continued
to live in the family home until her death. They were
married 72 years. Eileen was 96 years young

Eileen enjoyed her family along with traveling to various
countries, Disney World, many US states and visiting
family around the country. She took a class in repairing
pottery and could repair pieces to look like new.
She enjoyed the Northern Nevada Glass Club, going
to garage sales and having them at her home.

A Celebration of Life will be held at a later date. The
family would like to thank Kindred Hospice and especially
Katie and Brittany for the excellent care they provided.