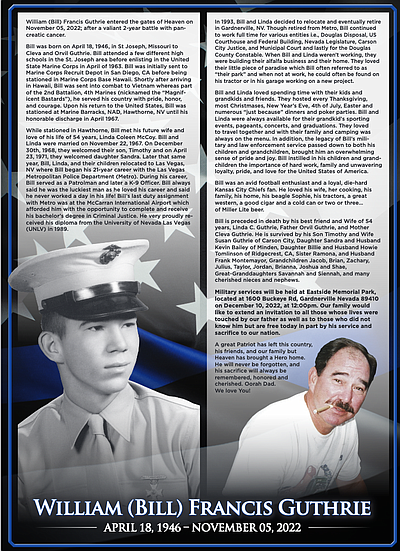 William (Bill) Francis Guthrie entered the gates of Heaven on November 05, 2022; after a valiant 2-year battle with pancreatic cancer.

Bill was born on April 18, 1946, in St Joseph, Missouri to Cleva and Orvil Guthrie. Bill attended a few different high schools in the St. Joseph area before enlisting in the United State Marine Corps in April of 1963. Bill was initially sent to Marine Corps Recruit Depot in San Diego, CA before being stationed in Marine Corps Base Hawaii. Shortly after arriving in Hawaii, Bill was sent into combat to Vietnam whereas part of the 2nd Battalion, 4th Marines (nicknamed the “Magnificent Bastards”), he served his country with pride, honor, and courage. Upon his return to the United States, Bill was stationed at Marine Barracks, NAD, Hawthorne, NV until his honorable discharge in April 1967.

While stationed in Hawthorne, Bill met his future wife and love of his life of 54 years, Linda Coleen McCoy. Bill and Linda were married on November 22, 1967. On December 30th, 1968, they welcomed their son, Timothy and on April 23, 1971, they welcomed daughter Sandra. Later that same year, Bill, Linda, and their children relocated to Las Vegas, NV where Bill began his 21-year career with the Las Vegas Metropolitan Police Department (Metro). During his career, Bill served as a Patrolman and later a K-9 Officer. Bill always said he was the luckiest man as he loved his career and said he never worked a day in his life! Bill’s last duty assignment with Metro was at the McCarran International Airport which afforded him with the opportunity to complete and receive his bachelor’s degree in Criminal Justice. He very proudly received his diploma from the University of Nevada Las Vegas (UNLV) in 1989.

In 1993, Bill and Linda decided to relocate and eventually retire in Gardnerville, NV. Though retired from Metro, Bill continued to work full time for various entities i.e., Douglas Disposal, US Courthouse and Federal Building, Nevada Legislature, Carson City Justice, and Municipal Court and lastly for the Douglas County Constable. When Bill and Linda weren’t working, they
were building their alfalfa business and their home. They loved their little piece of paradise which Bill often referred to as “their park” and when not at work, he could often be found on
his tractor or in his garage working on a new project.

Bill and Linda loved spending time with their kids and grandkids and friends. They hosted every Thanksgiving, most Christmases, New Year’s Eve, 4th of July, Easter and numerous “just because” dinners and poker parties. Bill andLinda were always available for their grandkid’s sporting events, pageants, concerts, and graduations. They loved to travel together and with their family and camping was always on the menu. In addition, the legacy of Bill’s military and law enforcement service passed down to both his children and grandchildren, brought him an overwhelming sense of pride and joy. Bill instilled in his children and grand children the importance of hard work, family and unwavering loyalty, pride, and love for the United States of America.

Bill was an avid football enthusiast and a loyal, die-hard Kansas City Chiefs fan. He loved his wife, her cooking, his family, his home, his beagle Sophie, his tractors, a great western, a good cigar and a cold can or two or three... of Miller Lite beer.

Military services will be held at Eastside Memorial Park, located at 1600 Buckeye Rd, Gardnerville Nevada 89410 on December 10, 2022, at 12:00pm. Our family would like to extend an invitation to all those whose lives were touched by our father as well as to those who did not know him but are free today in part by his service and sacrifice to our nation.

A great Patriot has left this country, his friends, and our family but Heaven has brought a Hero home. He will never be forgotten, and his sacrifice will always be remembered, honored and
cherished. Oorah Dad. We love You!