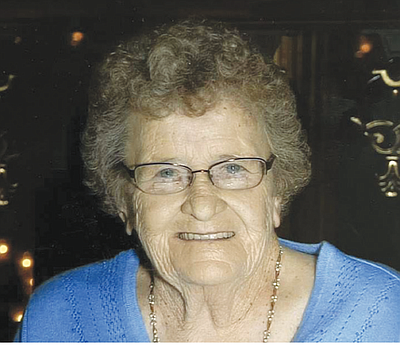 Adele Mary Whitcome (Dowding) of Carson City, Nevada gained her angel wings and peacefully passed away on January 3rd, 2023. Born on October 2,1930 in the small town of Willows, California to Leslie and Edna Dowding. Adele spent 92 wonderful years spreading love, joy, and sass to any and all around her.

Adele grew up as the middle child of two sisters, who she loved deeply. After graduating from Willows High School in 1948, Adele met the love of her life, Harvey Whitcome. Her father introduced Adele to Harvey while he was a cook and bartender at the Willows Hotel. After several years together, Harvey and Adele married on November 5,1955 at St Paul Lutheran Church of Artois. The two decided to settle down in Carson City, Nevada where they would go on to raise three beautiful children: Janine, Mike, and Judy. Adele worked for the State of Nevada Gaming Control Board until 1996, retiring after 35 years. She took pride in her career
earning several awards and making lifelong friends. She spent her free time going to ceramics, gardening, sewing, weekly lunches with friends, attending UNR Basketball games as an avid season ticket holder, and spending time with her growing family. Not a day went
by where she didn’t talk about how much her children, grandchildren, and family meant to her -- her family was arguably her most important achievement in life.

Adele was preceded in death by her husband Harvey.

Adele was the most giving and special woman until the very end, she will be greatly missed forever.

A Celebration of Life will be on Friday, January 27th at Shine Church, 3690 US-395, Carson City, NV 89705, at 11am. It will be followed by a reception. In honor of Adele, the family encourages attendees to wear UNR attire or her favorite color blue. For questions, email Melodywhit745@gmail.com. If you are not able to attend in person, we will be streaming using the Zoom link here: https://tinyurl.com/bdz7y7d2 .

“There are some who bring a light so great to the world, that even after they are gone the light remains”