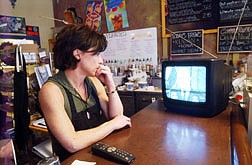 June Joplin watches a fuzzy signal from her television at work of images of Downtown Baghdad shortly after it was bombed heavily at approximately 10 am PST. Joplin&#039;s oldest son is in the Marine Corps stationed somewhere in the Persian Gulf. Her youngest son is awaiting deployment with the Army. Photo by Brian Corley 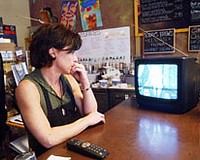