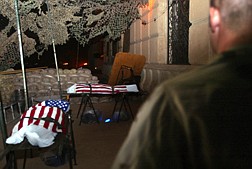 An American soldier in Tikrit, Iraq, Friday, Sept. 19, stands guard over the flag draped bodies of unidentifed soldiers who died late Thursday evening, Sept. 18, 2003, after their squad was ambushed while on patrol. The coordinated attack against U.S. forces cost the lives of three soldiers and wounded another two. &#124; Rob Griffith 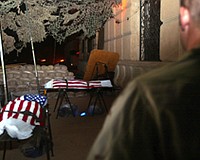