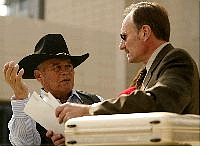 Chief Raymond Yowell of the Western Shoshone Nation, left, confers with tribal attorney Robert Hager, at the U.S. Federal Courthouse in Las Vegas on Friday. The tribe filed a lawsuit against the federal government saying a 19th century treaty with the feds prohibits building a nuclear dump on the Yucca Mountain site. Joe Cavaretta/Associated Press 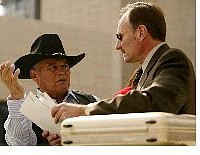