In this Dec. 3, 1984 photo, Michael Jackson, center left, performs with his brothers at Dodger Stadium in Los Angeles as part of their Victory Tour concert. Jackson, the sensationally gifted child star who rose to become the &quot;King of Pop&quot; and the biggest celebrity in the world only to fall from his throne in a freakish series of scandals, died Thursday. He was 50. (AP Photo/Doug Pizac) 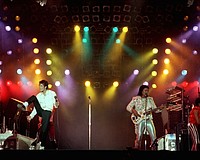 Michael Jackson, like Elvis, was a King who died young