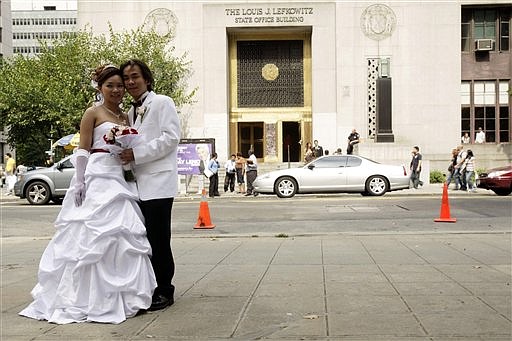 FILE - In this Sept. 9, 2009, file photo Kian Lee, right, and his bride Maya Ong, both from Queens, pose for a photo after their wedding ceremony at the Manhattan Marriage Bureau in New York. A broad array of U.S. census data, for release on Tuesday, Sept. 22, 2009, indicates that the recession is profoundly disrupting American life. Unlike the Ongs nearly one in three Americans 15 and over, or 31.2 percent, reported they had never been married, the highest level in a decade. The share had previously hovered for years around 27 percent, before beginning to climb during the housing downturn in 2006. The never-married included three-quarters of men in their 20s and two-thirds of women in that age range. (AP Photo/Mary Altaffer, Fille) 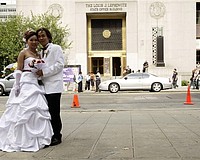 Census: Recession had sweeping impact on US life