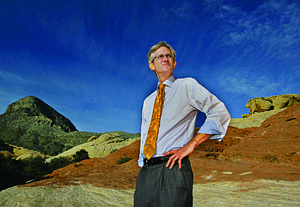 Nevada Democratic gubernatorial candidate Rory Reid stands in front of Turtle Head Peak at Red Rock Canyon Natural Conservation Area west of Las Vegas on Friday, April 2, 2010. As chairman of the powerful Clark County Commission in Las Vegas, Rory Reid, 47, is not exactly a newcomer to the public spotlight. Even so, his name is often linked to that of his father, U.S. Senate Majority Leader Harry Reid. The younger Reid is hoping to simplify how he is introduced if he&#039;s successful in his bid for the Nevada governor&#039;s office. (AP Photo/Laura Rauch) 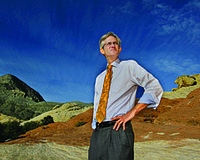