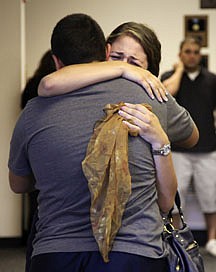 A woman weeps as she is embraced during a vigil held for 3 missing hikers Wednesday, July 20, 2011, at the Holy Apostolic Catholic Assyrian Church of the East in Ceres, Calif. Three people are presumed dead after being swept over a raging waterfall in Yosemite National Park on Tuesday. The three were believed to be in Yosemite as part of a Modesto-based youth church outing.(AP Photo/Ben Margot) 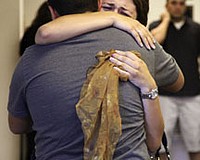