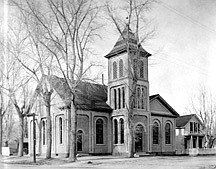 Special Collections at UNR, Charles Lynch CollectiThe First Presbyterian Church of Carson City is seen here about 1908. The church was originally built in 1864 without the bell tower, which was added in 1896. The upper cupola, which was made of wood, deteriorated and has since been removed, but the lower brick portion still marks the entrance to th historic church. The congregation, founded in 1861, will celebrate its 150th anniversary on Sunday. 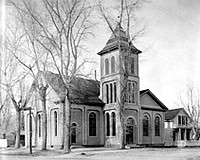