Penticton British Columbia, couple Albert Chretien and wife Rita are shown in this undated Royal Canadian Mounted Police handout photo. The coupe went missing en route to Las Vegas more than a month ago. Rita Chretien has been found alive Friday May 6, 2011 in a remote part of northeastern Nevada police say. Hunters in Elko Country, Nevada, found Rita alive on Friday, RCMP Cpl. Dan Moskaluk announced in a tweet. There is no word yet about the whereabouts of her husband. (AP Photo/Royal Canadian Mounted Police via The Canadian Press) 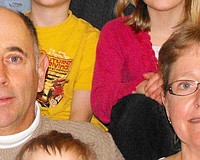