A Convention Center billboard asks people to pray for the Marines that will killed in Hawthorne, Nev. on Tuesday March 19, 2013. Military officials say a mortar shell explosion killed seven Marines and injured a half-dozen more during a training exercise in Nevada&#039;s high desert. The accident prompted the Marine Corps to immediately halt use of some mortar shells until an investigation can determine its safety. (AP Photo/The Reno Gazette-Journal, Marilyn Newton) 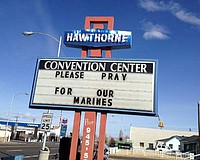