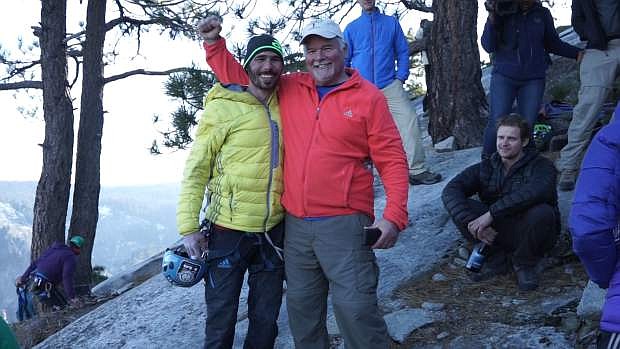 In this Wednesday, Jan. 14, 2015 photo provided by Ted Distel, Kevin Jorgeson, left, is greeted by his father Eric Jorgeson after reaching the top of El Capitan, a 3,000-foot sheer granite face in Yosemite National Park, Calif. Rock climber Tommy Caldwell was first to pull himself atop the granite face followed minutes later by his longtime friend Jorgeson. After years of practice, failed attempts and 19 grueling days scaling the vertical wall on El Capitan by their bloodied fingertips, the friends completed the first free climb up the world&#039;s largest granite monolith. (AP Photo/Ted Distel) 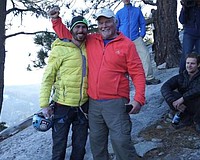 YOSEMITE NATIONAL PARK, Calif. — Day after day, the two Americans who completed what had been considered the world’s most difficult rock climb bloodied their fingertips, endured bruising falls and balanced their bodies on handholds as small as coins.