In this April 20, 2013, file photo, male Greater Sage Grouse perform their mating ritual on a lake near Walden, Colo. U.S. Interior Secretary Sally Jewell is in Colorado on Wednesday, Sept. 21, 2016, to tout efforts to save the greater sage grouse across the West one year after the federal government decided not to invoke the Endangered Species Act to protect the rare bird. (AP Photo/David Zalubowski, File) 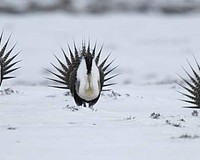