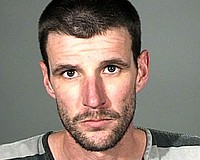 3 arrests made in Carson City burglaries

Detectives from Carson City Sheriff’s Office and Douglas County Sheriff’s Office worked a joint investigation Wednesday involving multiple residential burglaries between the two counties. A total of three arrests were made. The investigation led detectives to Dayton, where two suspects were located in possession of a large amount of stolen property from several burglaries.