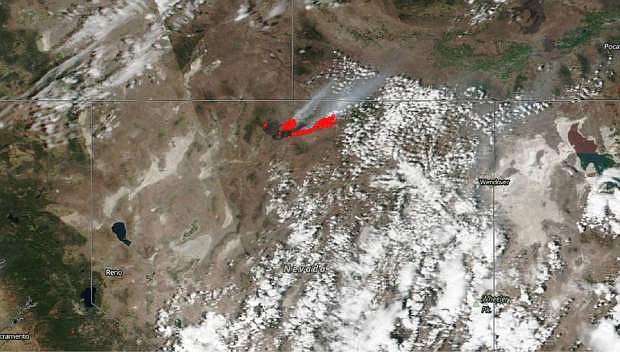 FILE - This July 8, 2018 satellite file image from NASA&#039;s Suomi NPP satellite shows a wildfire, shown in red, also known as the Martin Fire, in Nevada, and smoke reaching to Idaho. Destruction of sage grouse habitat by a series of large wildfires has prompted a ban on hunting for the game bird this fall across a stretch of north-central Nevada nearly twice as big as the state of Delaware. The Nevada Board of Wildlife Commissioners approved the emergency closure Friday, Aug. 17, 2018, of two specific hunting units in Humboldt and Elko Counties. The Nevada Department of Wildlife says at least 39 known breeding sites supporting about 750 male sage grouse were destroyed in July by the Martin Fire. (NASA via AP, File) 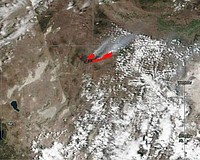