Retired Brig. Gen. Robert Hayes, a Vietnam War pilot and former chief of staff and commander of Army Guard for Nevada, speaks about his experiences during the war. 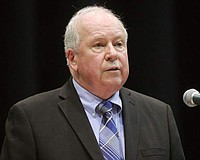 RENO — The loud chopping sounds of helicopters flying over the thick, tangled jungle became a constant day-to-day reminder of the United States’ involvement in Vietnam. Referred to both as the first war to enter living rooms on the evening news and a helicopter-driven war primarily relying on the Bell UH-1 Iroquois or “Huey” helicopter, the Vietnam War became one of the longest ones fought in the country’s history.