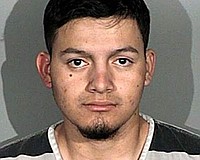 A 19-year-old man who’s in custody on immigration and theft charges is believed to be the perpetrator of four western Nevada homicides. Wilbur Ernesti Martinez-Guzman was arrested 4:30 p.m. Saturday after investigators determined Friday he was a suspect, it was announced at a Sunday afternoon press conference.