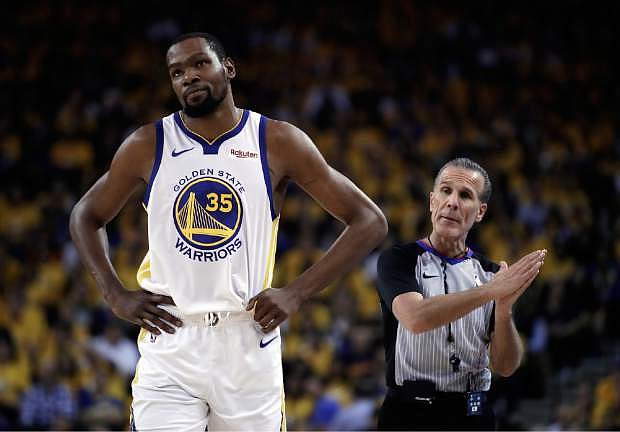 FILE - In this Wednesday, May 8, 2019, file photo, Golden State Warriors&#039; Kevin Durant, left, walks away from referee Ken Mauer during the first half of Game 5 of the team&#039;s second-round NBA basketball playoff series against the Houston Rockets in Oakland, Calif. Durant is yet to progress to on-court work in his recovery from a strained right calf and won&#039;t be ready to return for Golden State in Game 1 of the NBA Finals on May 30. (AP Photo/Ben Margot, File) 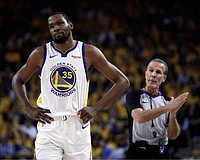 OAKLAND, Calif. — Kevin Durant won’t be ready to play in time for Game 1 of the NBA Finals on May 30. The two-time reigning finals MVP has yet to return to on-court work while recovering from a strained right calf. Big man DeMarcus Cousins might be healthy for Golden State’s series opener against either Milwaukee or Toronto.