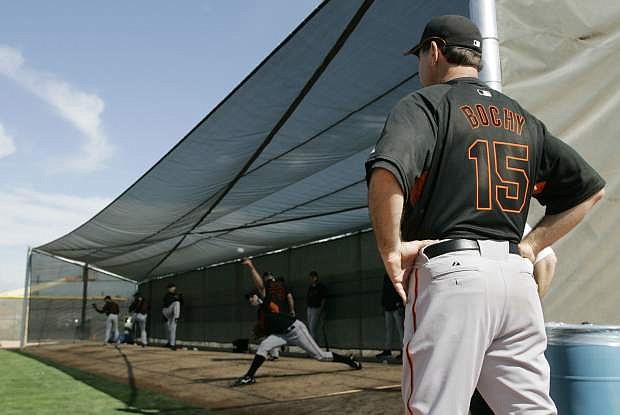 FILE - In this Feb. 15, 2007, file photo, the San Francisco Giants&#039; new manager, Bruce Bochy, right, watches new pitcher Barry Zito throws off the mound during their spring training baseball workout at Scottsdale Stadium in Scottsdale, Ariz. Just as important to Bochy as capturing those three World Series titles in five years managing the Giants is his fairness and genuine way in dealing with the players who have helped him win during a decorated career on the dugout&#039;s top step. Everybody wants to do their best for the 64-year-old Bochy as he wraps up an accomplished 25-year managerial career that featured his first 12 seasons in San Diego and the last 13 with San Francisco. (AP Photo/Eric Risberg, File) 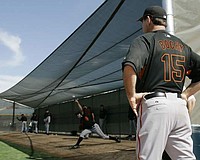 SAN FRANCISCO — Bruce Bochy once took a bat to a flat-screen TV during a San Francisco Giants team meeting to make a point to his players. It just took a few more swings than he expected because it didn’t break on the first attempt as he had figured. “It’s not like a regular TV where it shatters, it just went thud,” Bochy recalled this week.