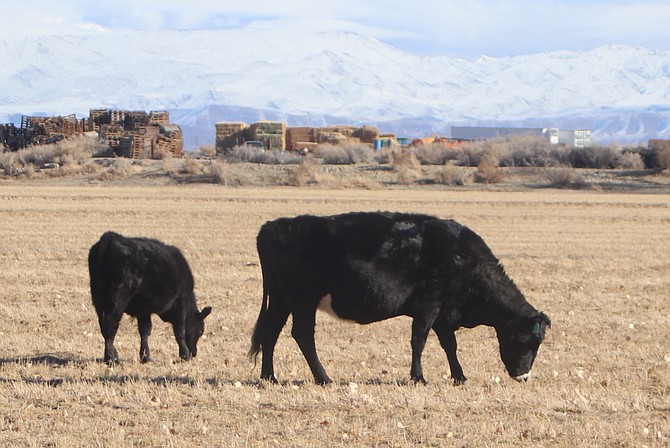 Higher beef prices might be in store for 2023. Cattle graze in a field northeast of Fallon and shadowed by the Stillwater Range.

“During the second quarter there was a lot of speculation that we would see cow slaughter decline precipitously and it just didn’t happen,” he told attendees at a virtual presentation at the Cattlemen’s Update sponsored by the University of Nevada, Reno.

Led by the university’s College of Agriculture, Biotechnology & Natural Resources, and its Extension and Experiment Station units, other partners include the U.S. Department of Agriculture’s Beginning Farmer and Rancher Development Program, and Western Center for Risk Management Education.

Drought had a big impact on ranchers’ decisions to cull their herds during the year, due to increased hay prices, he said.

“A huge driver is when you have hay prices at the level they’re at today, in excess of $250-$300 a ton,” he said. “There are a lot of these guys who fought the weather and tried to hold on who just got to the point where they were in a classic case of out of hay and out of money at the same time.”

He said that resulted in placing lighter and lighter cattle into feed yards because there wasn’t any place left for them to go.

He said the majority of ranchers in the Nevada marketplace sell calves, but it might be a time to hang onto those.

“If there was ever a time to look at retaining ownership it could probably be through 2024,” he said. “There’s that much room in the market.”

He said winter grazing numbers are incredibly low, but there might be an improvement in spring grazing thanks to wet weather.

“We don’t see the number of winter grazing cattle that normally come in the March-May window,” he said. “There’s enough precipitation that we could see some spring grazing opportunity.”

Typically, spring is when the fed cattle supply is at its tightest but that late in the year will be when prices will be at their highest.

Close said after an excellent beef demand in 2021, there was some softening during 2022.

One potential increase for demand could be overseas markets, which consume for 12-15 percent of the U.S. production. He said 70-75 percent of that goes to Asia.

“I think this is one way we got a lot of eggs in one basket,” he said. “We are in a very mature industry and our only chance to grow that slice of the pie is to increase those exports.”

He told the ranchers that China is the third largest importer of beef behind Japan and South Korea and Mexico tied for second.

“China is the 900-pound gorilla in the room when it comes to growth,” he said, citing discussions with importers who believe the country will be the top customer for U.S. beef in the near future.

“We are looking at incredibly good beef prices for the year and even better average prices as we go through the next three and even four years,” he said.

When asked about competition from lab and plant-based products he said that while he wouldn’t count them out, their current impact on the market has been negligible.

“I think they’ve got a long way to go before they can scale up lab-based products,” he said. “It’s so minutely small that they’re not impacting conventional production.”

He said retail sales of those products are contracting and that there could be a consolidation of companies.

Consumers trend of eating at home during the coronavirus outbreak seems to be surviving, Close said.

When restaurants were shut down, people shifted to buying beef at the grocery store.

“They couldn’t go out to eat, couldn’t go to the movies, so they would reward themselves by eating better at home,” he said. “That trend we’re seeing hold at this point in time. Meals at home have really gained momentum.”