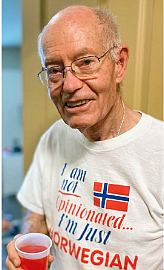 Orin, as he was known, was born on July 21, 1938 to Rolf Edward Gilbertson and Mildred (Bjornstad) Gilbertson in Tehachapi, California.

Orin grew up in Salem, Oregon and after high school he attended Linfield College in McMinnville, Oregon. He studied Physics, Mathematics and Professional Education. While at college, he met the love of his life, Clare Johnson. After graduation they moved to China Lake, California to start their new life together at the Naval Weapons Center.

Orin, retired after 35 years of working for the Department of Defense on many projects for the Naval Weapons Center.

After retirement, the Gilbertson’s moved to Desert Hot Springs, California to be closer to Clare’s parents. During the summers they traveled to Carson City to escape the heat of the desert, along with being members of WIT (Winnebago Itasca Travelers) Tours participated in caravans Meeting new friends was a high light from each trip.

He was an avid amateur ham radio operator (WW6O) and taught many classes and shared his love of DXing. Both Orin and Clare (N6ODO) are operators, so in the world of ham radio’s they are known as an extra couple having extra class licenses. WW6O is now a “Silent Key”.

Orin was preceded in death by his parents and his brother Eugene Gilbertson.

Arrangements were provided by Autumn Funeral and Cremations